Pour Some Sugar on ME! 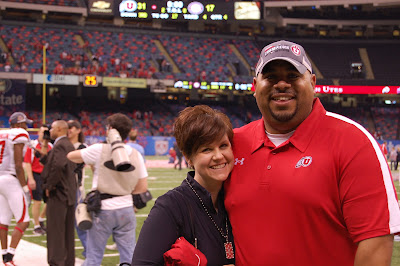 So happy after the big WIN!!! 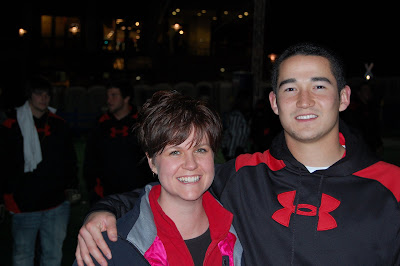 Me with Louie Sakoda.  Pretty sure this photo may be worth something someday!  haha 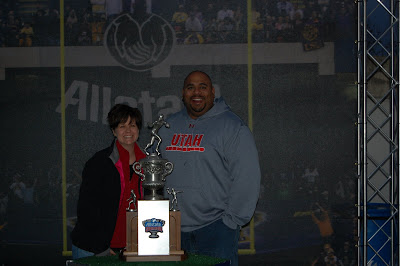 Jeff and I with a replica of the trophy which will now be displayed at the U!!! (not the replica the real thing) Yeah!
New Orleans was a lot of fun.  I got there on New Year's Eve.  Jeff and I went to an early dinner because I had been on a plane and was starving.  We ate at a place called Zea's and I had some Thai BBQ ribs, cabbage and black-eyed peas (for good luck in the new year) and Thai snap peas.  It was very good. Jeff had fried catfish and cheesy corn grits (heavenly!!)
We went to fan-fest.  The two pictures from above.  Then we went on a paddle boat dinner cruise on the Mississippi.  It was really cool.  The pictures didn't turn out great it was too dark.
We went back to the hotel and tried to get some sleep but it was business as usual for Jeff with the phone ringing off the hook so we finally just got up and watched the fireworks over the Mississippi and then tried again to sleep.
New Year's day I went to the wives activity which was pretty fun.  We decorated parasol's and then were in a Mardi Gras style parade.  We threw beads and followed a band through the streets to the restaurant for lunch.
The following day I did a short hour tour with my father-in-law and then off to the game.
The rest is HISTORY!!
Go UTES! and Happy New Year.

Rhett and Tiffanie Jackson said…
TOO funny....here the Utes won this amazing game and the first thing (most of us) notice is your HAIR!! I like it! You guys look like you had WAY lots of fun!!! Go UTES!!
January 5, 2009 at 6:43 PM

Wendy G. Atkins said…
Every time the Utes are playing I just try to find Jeff on the sidelines. And each time I see him I announce it and get super excited. It's like playing where's waldo! Glad you had so much fun though. I'll see you tomorrow morning.
January 5, 2009 at 7:06 PM

Master Bedroom Makeover Board and Batten

July 13, 2015
I highly recommend a few items although you don't HAVE to have them it just makes this project go so much faster.  I bought a pancake compressor with three nail guns included saved me on this project and a miter saw.  I bought both from Home Depot and they didn't pay me to say that it is just where I happen to shop.  I actually had this all measured out and went to Home Depot and they cut the mdf primed boards for me.  However I later purchased the miter saw and was then able to cut things right here at my house.  The nail gun I used is a 16 gauge gun that can shoot nails up to 3 inches.  I used a 2.5 inch nail to cover the thickness of the board and wall. Ok so I recommend deciding how you want your boards spaced first and measure and mark on the wall where you want them.  I tried to do every 16 inches because that is how far apart my studs were but then I realized my wall wasn't an even length and so I have some that look a little off on the ends.  Lesson learned
Read more