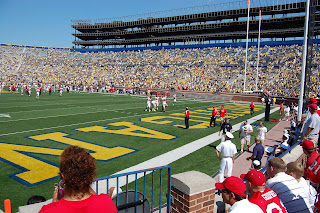 So anyone out there who may be a football fan understands the awesomeness that is Michigan football.  Seriously it's Michigan baby. But anyone who is a UTE fan understands what a HUGE victory this was for us this past weekend, and I was there in the BIG house yelling with 3500 other Utah fans against 105,000 Michigan fans.  It was unreal!!!  A once in a lifetime experience.  Those tickets are sold out 8 years in advance and I got to be there and watch our team win.  Thanks to my husband for letting me have this great experience. 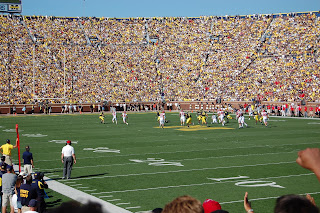 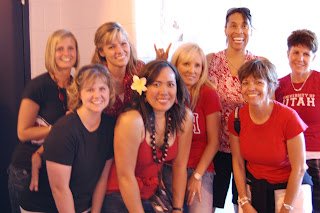 This picture is blurry because I did not take it, I had to be in at least one of the shots to prove I was really there!! These are some of the other coaches wives and staff that were at the game.  We had a BLAST.

bhblood said…
I am feeling very jealous!! I am so glad that you had fun! By the way- what cheap comment are you feeling bad about? I don't even know what you are talking about! Have a good night!
September 2, 2008 at 10:44 PM

Jane said…
How fun, I am so glad they won! And super cool on your photos being made famous! Aren't you loving your camera? I wonder how I ever lived without mine.
September 2, 2008 at 11:00 PM

jallen06 said…
OMG I can't believe you were there in person how awesome!!! We actually got the game here and it was a great win!! UH plays Weber this Sat. Utes need to make a roadtrip so I can see ya guys!! I need your cell# email it please!!
September 4, 2008 at 7:55 PM