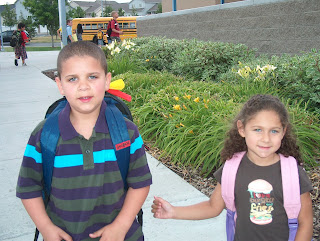 So being the crazed mother that I am I totally forgot the camera when I dropped Dalton off for the first day of Kindergarten.  The batteries were charged and I even charged a spare set but without the camera what is the point of charged batteries.  Anyway..  we picked him up and took a few pictures and Peyton had to have her back pack on too which I thought was so cute. 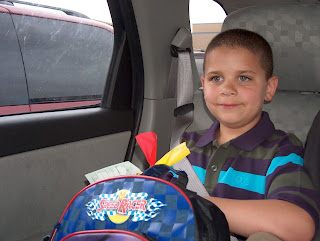 In the car on the ride home.  He had some nervousness on the way but that quickly resolved with a pep talk from mom.  He stood in line with all the other kids , and on his way into the classroom he turned and looked for Peyton and I and waved goodbye.  It was pretty cute.  I was a little teary but so proud that it went away quickly.

Jill, Wes, and Andy said…
I glad you survived your first day, mom! Didn't we just talk about the camera yesterday? I love the one you sent me via the phone. Hope he had a great day
August 5, 2008 at 9:58 PM

Dan and Melissa said…
Wow...what a brave kid! The first day of school (good job Dalton). I love your blog Brandi. I'm glad to hear you did so well as well Brandi (that can be tough seeing your child leave for Big school). You'll have to give me some advise next year when Katie starts because I'm already nervous.
August 8, 2008 at 2:35 PM